The history of the Wyckoff Fire Department spans a century of service, from its humble beginnings in 1907 to 2007, by volunteer firefighters who have always given freely of their time, effort, and talent without compensation. From a single fire company, Company No. 1, formed in 1907, to the formation of Company No. 2 in 1938 and Company No. 3 in 1943, the evolution of the Wyckoff Fire Department can be observed by looking back through the history that spans a 100-year of the township's most essential volunteer organization.

Despite the esprit de corps of firefighters, the township's fire protection needs eclipsed the capabilities of the department's equipment, and the decision was made in 1917 to buy a four-wheel chemical truck from the Paterson Fire Department.

The department's continued success was due to a substantive growth in firefighting techniques and the acquisition of newer and better equipment during the period from 1912 to 1923. After ownership of the company's equipment was transferred to the township in 1923, a white chemical truck was purchased. This was quickly followed by the purchase of a small supply truck in 1925, a year that also saw the installation of a siren system and a complete renovation of headquarters.

The siren was a marked improvement in calling volunteers to the scene of a fire as quickly as possible; it was a more effective alarm than the clanging of the old railroad rail ring located at headquarters on Clinton Avenue, which today is part of the Exempts Firefighter's Memorial at Company No.1 headquarters at Scott Plaza behind Town Hall.

Already graced with family and community support, the Township was remarkably free of major fires until the alarm was sounded on November 24, 1935. The fire, considered to be the worst in Wyckoff's history, occurred at the Christian Sanatorium (now the Christian Health Care Center), resulting in the death of two patients and the destruction of an entire building. Assistance was rendered by fire companies from Hawthorne, Midland Park, Franklin Lakes, and Paterson. 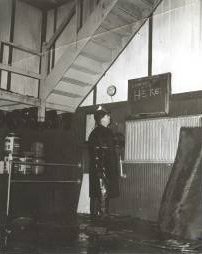 Throughout the first 32 years, the department used different kinds of chemical apparatus for fighting fires. In 1939, the Township purchased its first pumping engine, a brand new Ahrens‑Fox 500-gallon-per-minute (gpm) pumper. That enabled Company No. 1 to transfer a 1929 chemical truck to East Wyckoff, where it was rebuilt into a hose and tank truck by members of Company No. 2.

As the three companies grew, trained, and improved their skills, it was business as usual for the Wyckoff Fire Department at least until the early morning hours of Tuesday, March 22, 1955. Shortly after 2 a.m., the air horn at the Company No. 1 firehouse sounded a 20-second blast. Curious about the alarm, Police Chief Vance, called headquarters and was told that no fire had been reported. Patrolman Eugene Grelle was sent to the firehouse to make sure that everything was in order. To say that things were very much out of order would be an understatement. It seems that a fire, which is thought to have started right after midnight and was caused by a short circuit in the wiring, was consuming the firehouse. When the flames reached the air horn control wires, the alarm was activated for a short period before the heat rendered the air compressor inoperable. Two of the firefighter’s wives, Carolyn Landi and Lynn Standerwick then began making phone calls to notify the firemen. Although firefighters arrived quickly and battled the fire with special resolve, the fire devastated there meeting room and damaged the town clerk and tax collector's offices in the building. It soon became clear that they were fighting a losing battle, so they turned their efforts toward saving vital township records and ensuring that the flames did not spread to nearby homes.

By November of the following year, ground‑breaking ceremonies were held for the new fire department headquarters, to be constructed behind Town Hall. In the fall of 1957, the building was dedicated. By that point, the spectacular fire could be looked back on as a rude and expensive interruption in the department’s history.

Gone were the days of barn fires, bucket brigades, and clanking chemical rigs. The intervening advances in firefighting methods included the acquisition of high-powered pumpers, allowing fires to be fought with high-volume hoses compared with the garden hoses previously used from homes next door, and an aerial ladder truck carrying all the ladders needed to reach the upper floors of the structures. Besides the pumps, perhaps the biggest strides in local firefighting efficiency during this period were the purchases of modern firefighting equipment such as the SCOTT, self-contained breathing apparatus, which allowed members to enter a smoke-filled environment and remain there as long as the air supply and heat allowed. This made fighting the fire and searching for residents more effective and safer.

The 1970s were also an exciting time. It was during this era that Wyckoff’s first female firefighter, Karen Lukert, was accepted into Company No. 2. Since that time, all three companies have had female members who have been successful firefighters. Jacob Flaker was named the Wyckoff Fire Department’s Fireman of the Year. He was a member of Fire Company No. 1 and also the Wyckoff Township clerk.

In the late 1990s, the Township saw the largest fire loss of commercial property in its history when two major fires occurred only months apart and only two blocks from each other. Fortunately, there were no deaths. First an early morning fire on April 16, 1998, destroyed Aldo’s Italian Restaurant and the Wyckoff Ford dealership on Franklin Avenue. Second On June 3, 1998, Beauregard’s Restaurant, which shared a building with Wine & Spirit World located on the corner of Clinton Ave. and Wyckoff Ave. 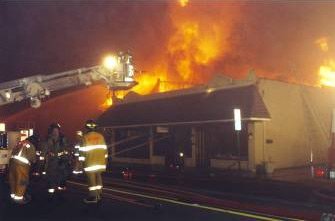 In an attempt to attract and retain membership, the residents of Wyckoff overwhelmingly approved a Length of Service Awards Program (LOSAP) in 1999 for the members of the volunteer fire department and ambulance corps. The plan calls for an annual payment—by the Township—to a retirement plan for each qualifying member. Members qualify for benefits based on a point system that measures participation in various fire department activities including response to fire calls and attendance at drills and meetings.

The year 2001 was a particularly grievous one for the Wyckoff Fire Department. A Wyckoff volunteer firefighter, Dana Hannon (whose father Tom Hannon also is a long-time volunteer), who was also a career New York City firefighter, was one of the first responders lost in the World Trade Center disaster of September 11, 2001. 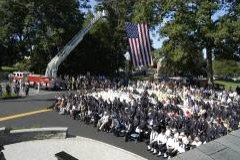 During the dedication service, Chief Richard Alnor introduced the Dana Hannon Distinguished Service Award. This award, in Dana’s honor, would be issued to any member who performed above and beyond the call of duty each year. The first members to receive this award were the committee that completed the Fallen Fire Fighters Memorial.

Without the support of their spouses and families, and their understanding and appreciation for the firefighters, the Wyckoff Fire Department wouldn’t be half of what it is today. They endured numerous late nights home alone during terrible storms and other emergencies, ate many meals alone, and took care of their families while the volunteers were helping others. The firefighters would like to take this opportunity during the 100th anniversary to thank their spouses and families along with the Ladies Auxiliary, consisting of wives, mothers, and daughters of volunteer firefighters, who continue to be an asset and source of support.

As the families are a huge part of the history, the commitment to the community has been and continues to be exemplified by the participation and support of business people who continue to support and be active as volunteers.

At some time in their lives, almost all little kids dream of becoming firefighters. It may be due to the lure of the bright red trucks, or the excitement of the fire truck rolling down the street—lights flashing and sirens wailing. Few people can escape the spell; fewer still ever realize the dream. Those that do are a special breed. They can endure sudden starts at night as the beep of a pager wakes them from sound sleep. They tolerate freezing winds and scorching heat. Many have never eaten an entire holiday meal at one sitting because they have to race to a fire caused by someone else’s turkey. They risk life and limb to protect the homes and lives of their neighbors. And they do it for free.

This message is only visible to site admins
Problem displaying Facebook posts.

Error: This Page access token belongs to a Page that has been deleted.
Type: OAuthException
Code: 190